How Does a Tunisian Wedding Take Place

– Preparation of the Tunisian wedding

– Ceremony of a Tunisian wedding

Almost 99% of the Tunisian population is Muslim. Thus, the traditions and customs of marriage are intimately linked to Islamic dogma. The Tunisian wedding is, above all, a civil act. It has the particularity of taking place over 7 days, and the ceremony retains the ancestral customs related to marriage—a small overview in this post.

Although each region of Tunisia has its customs and wedding rituals, some remain traditional to a Tunisian wedding:

– The wedding always begins with the engagement. The future husband, accompanied by his parents, goes to the home of his fiancée to officially ask for her hand.

– Once both families accept the union, it will be crowned with a recitation of verses from the Koran, cries of joy, also called “zaghrouda”.

Preparation of the Tunisian wedding

The traditional Tunisian wedding lasts a week, during which the bride is the center of all the attention. In the past, she had to wear up to 7 different ceremonial dresses accompanied by embroidery and jewelry. The process has been modernized, but it retains solid ancestral roots.

Saboun or the first day

This is the starting point of the wedding. The bride-to-be prepares her trousseau with the help of relatives such as her mother, sisters, aunts and cousins.

This trousseau will be composed of all the elements that the family considers important for the future household’s good establishment, such as kitchen utensils, household appliances, furniture, and decorations.

Good to know: the saboun is followed by the second day or “hazzén el farch,” during which the trousseau is unpacked in front of the family, who then helps to tidy it.

Accompanied by her friends and relatives, the bride goes to the hammam, a real ritual of relaxation and beauty. Various treatments can be performed there:

During this new rite, the bride is accompanied by songs and applause while being covered with a safseri, a kind of veil hiding her face.

Laying of the henna

During this 4th day, the bride will wear a traditional red dress. A woman who specializes in henna painting will decorate her hands and feet.

This new step will be repeated for 2 more evenings.

Good to know: the henna ceremony is meant to bring luck to the couple.

This party takes place 2 nights before the final wedding party and can last 2 to 3 days.

The bride must then:

– Wear up to 4 different traditional outfits.

– Have an extra layer of henna applied.

– Be given jewelry by her husband, who is allowed to attend the final hours of the party.

This step is significant because of the last application of henna which will take a darker colour and last longer.

After the wedding rituals and especially of the bride come two new rites that will unite the future spouses.

It is a meal gathering the bride and groom, their families and friends.

During this occasion, the bride and groom will wear traditional Tunisian silk costumes whose colours vary depending on the region where they celebrate their union.

Good to know: on this day, the groom offers the bouquet to the bride as a symbol of fertility. 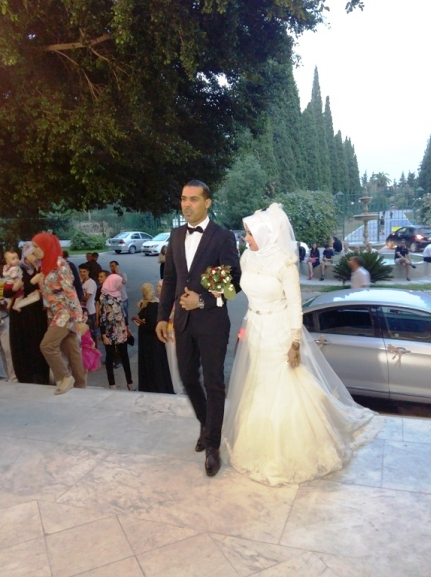 Before any religious wedding, the civil wedding will be done this way:

– The civil marriage act is performed with two witnesses in the presence of notaries or a Civil Status Officer.

– Finally, the religious ceremony is consecrated by an imam and can take place at the mosque or the home of the bride’s parents.